It’s just about time for firearms deer season here at home. This year, as in years past, one of my sons and I will head to the deer blind armed with (him) a .308 and (me) a .243. This is saying something, because it’s only been a couple of years that rifle calibers were legal for deer in my state. You could use a carbine or rifle before, but it had to be chambered for a pistol cartridge. Now, anything .243/6mm or above is legal. That opens the door for a lot of different cartridges, to be sure.

But, what defines a rifle cartridge? How is one put together? Why is a .243 bullet the same diameter as one fired from a 6mm rifle? Let’s look at some specifics about cartridge construction and naming conventions, then we’ll look at the specific rounds (a “round” is another word for cartridge).

BONUS OFFER: Get your 500 Page Ammo Comparison Handbook (worth $43) for FREE right into your inbox

There are exceptions…the American-designed 6mms are metric-named, while the .338 Lapua Magnum (which was designed by the Finnish ammunition company named Lapua, among others) uses a caliber designator.

There are other anomalies in cartridge names that are explained in the descriptions…example, .30-06 is a .30-caliber bullet fired from a cartridge developed in 1906.

A modern centerfire cartridge consists of the following components:

This is the “container”, usually made of brass or steel, that holds all the other components of the round. When one hears about the “case head”, the area referred to is the bottom, or the part of the case that sits against the breech. It can either have a rim, to aid headspace and extraction, or be rimless. We need to digress for a moment and discuss headspace. This concept needs to be fully understood, especially if you are going to reload for your rifle.

What is “Headspace”?
“Headspace” simply means that part of the case that stops its forward movement into the chamber, against which it is held in place against the breech. A rimmed cartridge headspaces on its extended rim, and a rimless one headspaces on the shoulder of the case. (One exception is a belted magnum case. This case has a “belt”, a metal band, at its bottom that it headspaces on). If headspace is off, the rifle probably won’t chamber or fire the round or could even be dangerous.

The second component of a cartridge case is the primer. The primer consists of three parts:

There are two types of primers: Boxer and Berdan..

The Boxer primer is totally self-contained, with all three components enclosed within its metal cup. The priming compound is crushed, by the firing pin, against the rounded anvil which creates the spark that ignites the powder. There is one central hole in the bottom of the cartridge case for the primer to travel through. The Boxer primer is by far the most popular.

The Berdan primer is different in two ways: Berdan-primed cases have two tangential (to the center of the case) holes for the spark to travel through and the anvil is not contained in the primer cup but is built into the case as a raised “bump” in the center of the case against which the priming compound is crushed. Know About Rifle Calibers Online

NOTE: The Berdan primer is found mostly in European ammunition for older military surplus rifles. Most of the priming compounds used for these older rounds are corrosive, which means that they will pit the rifle barrel if it’s left uncleaned. It’s a simple, extra step to clean out corrosive compound. In addition to your normal cleaning routine, before you oil the barrel bore, squirt a little Windex into the muzzle. This will deactivate the corrosive compound. Just BE SURE to: run a clean patch down the bore after the Windex; and then run a patch or three soaked with oil down, after you do this. Oil the action as well and don’t forget the bolt face. Most “modern” mil-surp Berdan primed ammunition is not corrosive, but I never believe what it says on the box. Two extra minutes cleaning the bore will help keep it pristine.

The third component of a cartridge is the bullet. There are so many choices of bullets loaded into factory ammunition that choosing one would be an article unto itself. Suffice it to say, just choose the right bullet for the job at hand. We discuss bullet weights and styles in a little more detail when we look at specific cartridges. 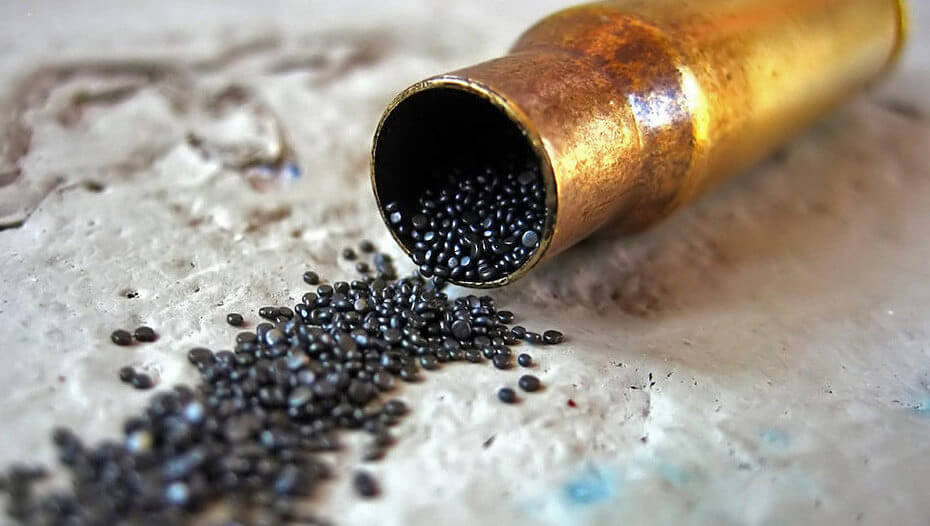 Now that we know how a rifle cartridge is put together, let’s look at some specific cartridges, roughly in diameter order.

A Quick Explanation…
We will look at, among other things, these items:
Rep. Bullet Weight (grains)
Muzzle Velocity (fps)
Muzzle Energy (ft./lbs)
Recoil Energy (ft./lbs.)
Notice that the bullet weight is in grains, the velocity is in feet-per-second and both energy figures are in foot/pounds. If that’s data you are interested in I highly recommend checking out our ammo comparison tool, allowing you to compare more than 300 rounds in 40 different aspects.

Delta Arms Brokers is a team of people specializes in providing quality firearms and accessories to registered buyers. Looking at this our era, there is gross insecurity all round the streets and there is the need for self protections.